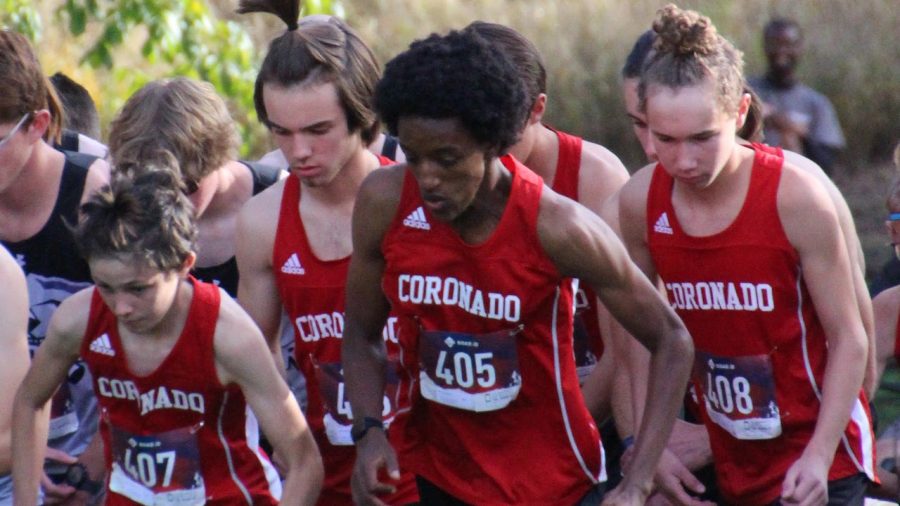 The 2021 season has been an incredible time of PR’s, victories, and teamwork for the Coronado Cross Country team. The Coronado boys won their first race in 5 years at the Harrison Panther Invite, and continued on to win Coronado’s very own meet, the Cougar Classic! In the most recent races, Coronado’s Cougars have scored incredibly well with the boy’s team – Zinabu Engstrom (12), Boston Potts (9), Briley Roth (9), Parker Davidson (9), Spencer Stepp (11), Bridger Steiner-Smith (10), Ben Davis (12), Alex Sedelmyer (12), and Matthew Ledford (10) – landing a first place victory and the girl’s team – Erin Gray (11), Macy White (10), Anneka Sedelmyer (10), Astoria Spradlin (9), Ava Friesema (9), Jessica Lasswell (9), and Amelia Echols (11) – achieving third place at the CSML South Meet. Just a week later the varsity girls placed 6th at 4A Regionals, and the boys finished third, continuing on to state. This season has been incredibly exciting and motivating for every runner with personal best times coming at almost every meet, from a couple seconds to entire minutes.
After qualifying for state, the boy’s varsity team extended their season to train for the big race. It was a hot and hilly race starting at the Norris-Penrose Center near Bear Creek Park, but the team still performed incredibly well. Z placed in the top 20 and Coronado scored 10th place! This is their highest placement at state since 2018, and they did it in an even more competitive division alongside nationally ranked teams. The season is continuing on for some of the cross country runners this month as they continue to train for Nike’s NXR Southwest national race in Arizona. It is a flat course down near sea level, so they can expect even more personal best times. Senior Zinabu Engstrom also signed to run D1 cross country with the University of Wyoming just this week!
Congratulations to all of the amazing runners, and a big thank you to Coach Stoughton, Coach Kane, Coach Watson, Coach Egger, and Coach Christensen for such an incredible season – you are all the best!

If you’re interested in checking out any more races or times for more Coronado runners, there is more available on Colorado Milesplit.