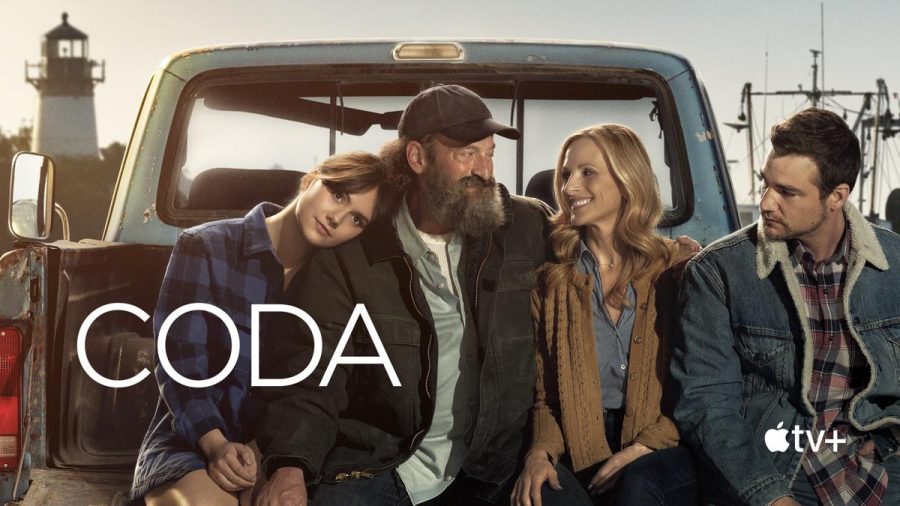 Poster for the award winning film CODA from Apple TV+

CODA, written and directed by Siân Heder, became widely lauded after its release in August of 2021. The film follows Ruby Rossi, a Child of Deaf Adults or CODA, as she navigates her passions and positions with her family and her future. CODA recently received the Academy Awards for Best Supporting Actor, Best Adapted Screenplay, and it is also the first movie from a streaming service – Apple TV – to win Best Picture.
CODA was incredibly well produced and executed. The writing was natural and eloquent, the story was amusing and emotional, and it certainly had the trappings of an award-winning film. One of the stand-out aspects of the movie was found in Troy Kotsur’s performance as Frank Rossi, Ruby’s father; he had the incredible range to make the audience laugh out loud and then subsequently tremble with emotion. It is hard to accurately describe his performance, but he simply portrayed a real parent – not fictionally perfect or infinitely flawed – just a caring, stubborn, and hilarious father. Kotsur certainly deserved the recognition as Best Supporting Actor, and Emillia Jones, Eugenio Derbez, Marlee Matlin, and the rest of the cast also gave wonderful performances. Both main plots of the film work well together to create believable and understandable conflict.
For decades, many groups have been unrecognized in film, and on the rare occasions they do receive recognition it can be negative, unpopular, or simply inaccurate. CODA seems like a beacon of progress and positive representation for the CODA community and the experiences of some deaf individuals. The film’s creators made the decision to cast deaf actors for deaf roles, and they consulted CODAs and deaf creators throughout the filmmaking process. I really connected and appreciated the movie – and many scenes had me crying or laughing uncontrollably – but I also view this movie from the perspective of a hearing person. The New York Times interviewed deaf filmmakers, critics, and CODAs, and they reveal that there are many challenges the movie runs into when it attempts to accurately represent the deaf and CODA experience. Siân Heder, the director and writer of CODA, is not a part of either of the core communities discussed in this movie, and when viewed more critically, this can become more apparent. Moments of humor and emotion might connect well with hearing audiences, but they may inadvertently invoke trauma for deaf viewers or create laughs at the expense of disability.
CODA is undeniably well made, and the acting is simply incredible. This film is an easy recommendation to anyone, but – simultaneously – everyone who enjoys this film should take the time to listen to the perspectives and opinions of deaf individuals and CODAs. It is incredible to have positive representation in Hollywood and culture for a perpetually ignored group, but there are still many negative stigmas and impressions that CODA creates that we must also acknowledge. Supporting deaf and CODA filmmakers and storytellers into the future will assuredly result in many great films about such an amazing community, and hopefully they may build on CODA’s success to tell even more unseen stories.