To Spin or To Stop? 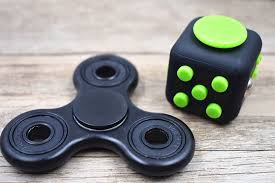 Fidget cubes and spinners are everywhere at Coronado, but their use is debated.

Fidget cubes and spinners are invading schools and workplaces all around the world. Undoubtedly, you’ve seen some of them in the hands of people in hallways and classes, and maybe you have used one yourself, either to play with or to manage your fidgeting. The purpose of these devices is to help people who have difficulty focusing on everyday tasks, allowing them to click the buttons on cubes or twirl the spinners around their fingers. Many people who have ADHD or similar disorders utilize these devices to manage their feelings, and trade in their tapping, hair pulling, or pen clicking for something with more social acceptance. “It’s just to help with leg shaking or fidgeting… it narrows your focus down so you don’t have all your senses overwhelmed, and it relieves stress,” said Riley Burgess, 11, about why he uses a spinner.

There are many people who don’t like these spinners, including a few teachers at Coronado. “They’re what the kids with ADD use to distract the kids without ADD,” said Mr. Stoughton. Opponents of fidget cubes and spinners believe that they take away from the classroom environment, and that they distract other students.

Spinners are made for people who are neurodivergent, not necessarily people who are neurotypical. The definition of neurotypical is “not displaying or characterized by neurologically atypical patterns of thought or behavior.” The definition of neurodivergent is the opposite, or a person who does display neurologically atypical patterns of thought and behavior. Neurodivergence is diagnosed and expressed in many different ways, including anxiety, depression, and other mental disorders. One of these is autism, and people who have autism often “stim,” of self-stimulate, in order to feel calm and safe. Rocking, flapping arms, and spinning objects are forms of stimming, but as they are not always commonly accepted as playing with fidget cubes or spinners. Many people who feel the need to stim can use fidget devices to feel better, and using something more accepted takes away some of the anxiety that comes with being looked at when stimming.

Neurotypical people live in a world created by and for them. Most schools, workplaces, and public places catered to the needs of neurotypical people. In most of these places, neurodivergent people can feel out of place if they aren’t allowed to stim or do something that will make them feel calm. By allowing and even encouraging forms of stimming like using fidget cubes and spinners, neurotypical environments become more inclusive. Banning these objects, on the other hand, would close environments to neurodivergent people. If too many people in school are playing with fidget cubes and spinners, it might result in a ban on these objects in schools like Coronado, leaving people who actually need them without the tools they need to feel comfortable and do their work.

Therefore, it is important for people who are neurotypical, and have not been diagnosed with a mental disorder or display symptoms of mental disorders to not use fidget devices if they don’t really need them. “There are people who need this, and when other people who don’t need this accommodation to focus in school use it, they ruin it for other people. Make sure to be respectful of others; if you’re going to use it, don’t be rude with it, and don’t hurt other people,” commented sophomore Sierra Meisner.

Fidget cubes and spinners may not be the best overall solution to forms of prejudice against people who have mental disabilities, and they do and will create distractions in classrooms for neurotypical students. However, normalizing these devices is normalizing acceptance, and it’s improving our view of individuality. Classroom distractions will happen, but those would happen anyway, without the fidget devices. In the end, fidget devices might be a fad, but with every societal craze comes the possibility for societal growth.