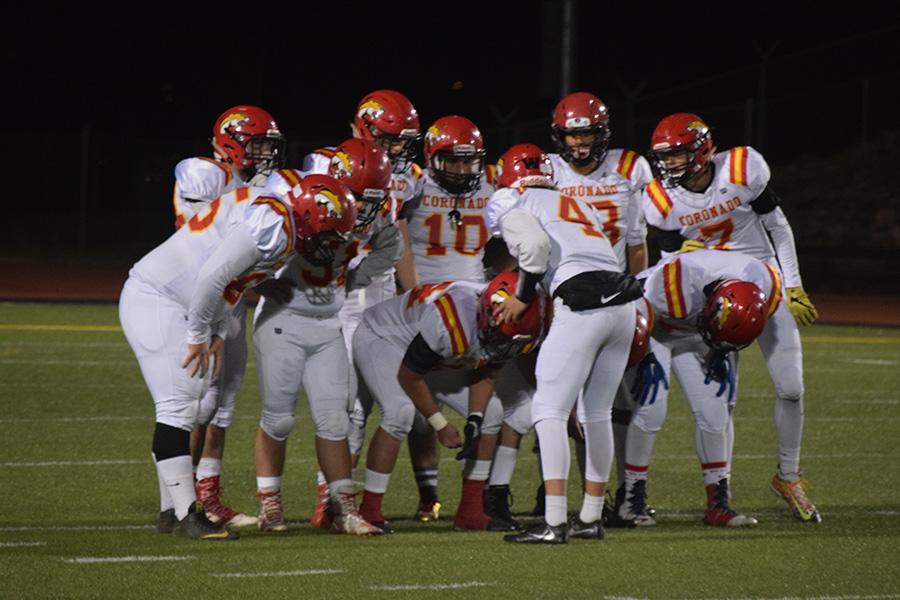 On Thursday, 9/7, the Cougars had their first home game in an action-packed, high-scoring, rambunctious and spirit-filled faceoff against Denver based Skyline High School. The night started off in parking lot with Coronado’s first tailgate in recent memory, which helped excite the dozens of fans which packed the student section for the first game, creating a sea of red and gold.

The stars of the night included Jordan Evans, 12, scoring three touchdowns over 94 yards and receiving a special shoutout from quarterback Toby Smith, 12, as one of the best players of the game. Toby also complemented junior Troy Renner, who recorded an impressive 303 yards over the course of the game for a total of 3 touchdowns, including a 60 rush for a touchdown in the beginning of the third quarter.

The team played well, but both Toby and Coach Gutowski were quick to call out Skyline’s impressive defense, which came out in full force particularly during the last quarter. Coaches and players were repeatedly frustrated at the aggression of Skyline, particularly when Smith’s helmet was knocked off twice throughout the course of the game.

Despite this, Coach Gutowski said he “was awfully proud of our guys for just battling and never giving up. We couldn’t stop them, but we got a good offensive streak, showed a lot of grit but just came up short.” ‘Skyline’s a good team” Toby Smith said in tandem with Safety Brandon Stogsdill, 11, who claimed Skyline’s performance was “not what we expected”

The Cougars ended up losing 50 to 70, but such a high scoring game is always impressive, and we are excited to see how they do on 9/15 against Sand Creek in the Homecoming game, where Homecoming King and Queen will finally be announced at Halftime!