Cruising the Crowd: Isaac Thompson is Mr. McQueen in Urinetown 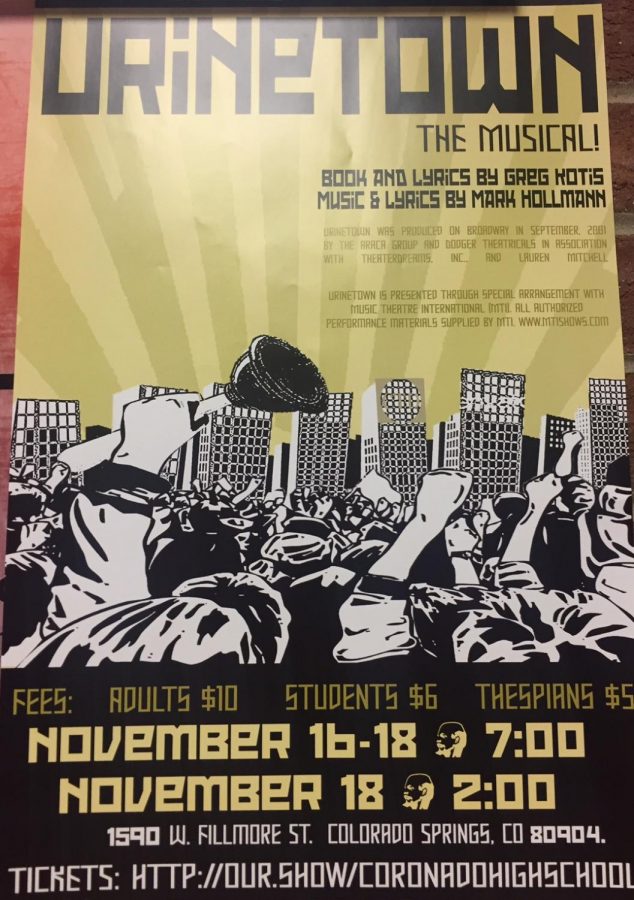 Coronado’s performing arts departments soar in all of their endeavors, and they work especially hard to ensure that biannual fall musical is the best it can be. In preparation for the fall musical Urinetown, cast and crew are working hard to make everything as impressive as it can be. Isaac Thompson, 11, plays Mr. McQueen in the musical.

Isaac’s character, Mr. McQueen, is one of the villains in the show and “the right-hand man of the main bad guy, Mr. Cladwell, played by Daniel Peterson. He’s the one that’s doing a lot of the work behind the scenes for the Urine good company, but Caldwell is the face of the company, and my character has his own motives. He’s kinda just a greedy little dude.” Many of the characters in Urinetown are complex, with their own motives, and there are some things about playing a villain that are exciting, such as the part “where I talk about, ‘oh, you have to pay more to go to the bathroom,’ and all the poor people are making faces at each other and making faces at me, but it’s kind of funny because I know them all outside of the play so I know they’re not actually mad at me.” It can’t be easy playing a bad guy, but Isaac said that ”I think I would enjoy playing a hero just as much as I like playing a villain.”

This is the first time Isaac’s done any production on this scale. Up until now, he has been in “small roles in middle school and elementary plays, but not really anything big.” Because of this, there’s some pressure to do well in this production. “There are a lot more people you let down if you mess up,” he explained. “Before, the audience would be 50 people or 100 people. This year, I’m going to the whole auditorium four different times, so that’s hundreds of people that see if I mess up. That makes it more important than what I was doing before.”

Being in the musical is an exciting, and forms friendship that help make high school fun. This has been a goal of Isaac’s since freshman year, but he wasn’t able to since he “wasn’t very committed to doing anything.” Getting into the musical, however, was a difficult process for him. “I didn’t realize when the [audition] dates were that you had to go,” he said. “There were two different days. One was for singing, one was for acting, and I didn’t realize you had to go to both. And I had to work one of those days, right after school, so I was like, ‘okay, auditions are today, I’ve got to get someone to cover my shift’. But it was stressful, I was like ‘I don’t know what I’m doing,’ but I figured it out, and now I have a role.”

It’s not all downhill coasting after auditions, though. Isaac mentioned that “we’re super busy a lot. I have to go to rehearsal every day this week even though I’m not the biggest part.” There’s a lot more to putting on a production than working every day. Sometimes, “people get stressed out easily, like the stage managers and Mrs. Ambroz. That’s not their fault though,” he allowed since sometimes people have difficulty with lines or singing or dancing. He did assure everyone, though, that they’re starting to take it more seriously, and, “we’re getting better.”

Isaac Thompson is one of Urinetown’s talented cast, and surely his and everyone else’s performances in the musical will be phenomenal. Make sure to catch Urinetown opening on November 16th and running through the 19th!