Cougars Rise to the Challenge at Battle Mountain Invitational 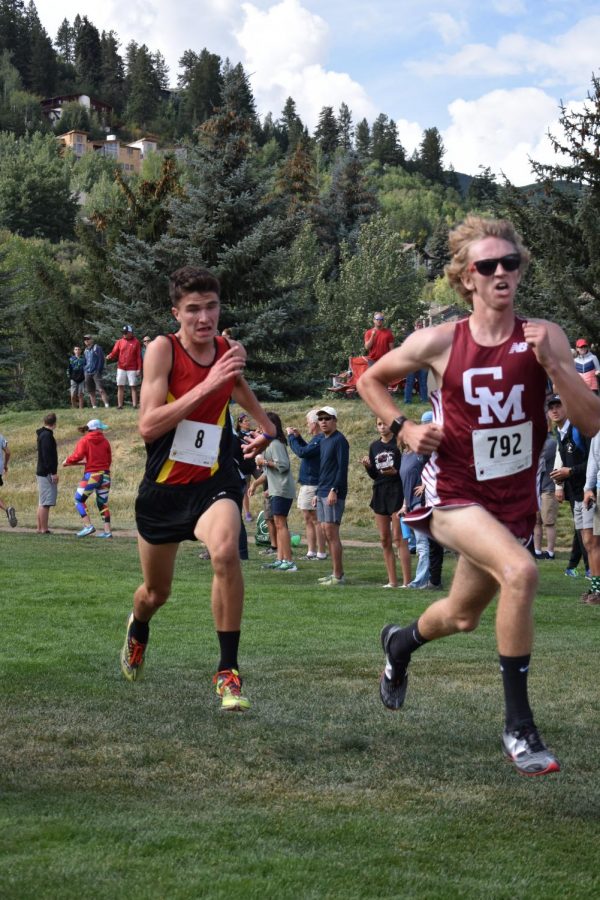 Ben Swanson chases down Cheyenne Mountain's number 2 runner during the last 50 meters of the race at Battle Mountain. You don't mess with a guy who can run a 1;56 half mile; Swanson passed him to take 3rd place overall.

Experience was a valuable asset for senior runners Maddy Morland and Ben Swanson, who used their prowess to reign in those in front of them and to secure top-five places. Swanson, who is known for his devastating kick, surged past a Cheyenne Mountain runner in the last 50 meters to secure third place. Only moments after Swanson and the men’s team had finished, Maddy Morland began her race conservatively. As she entered the following laps, however, she began to pick off those ahead of her. Her strategy of “[staying] positive and [using] the people ahead of [her] to pace herself” definitely paid off, as her time of 21:27 earned her fifth place among a talented women’s field.

Another highlight of the race was the team working together to step up to the high level of competition. Freshman Ary Mascarenas and senior Faith Roth worked together to secure the women’s team’s second and third spots, and Shauna Mackay, in her first race of the season, scored for the team. On the men’s team, Zinabu Engstrom continued his standout start to the season with an eleventh place finish. Only a freshman, Coach Stoughton praises him as “fast, hard-working, competitive, and always looking for ways to improve.” Engstrom is currently the fifth fastest freshman boy in the state.

The men’s team truly hit their stride on the hilly course spanning a golf course and soccer fields. The team limited its points with the 1-2 punch of Ben and Zinabu, and brought in its number three and four runners soon after with juniors Charlie Schroeder and Ben Hayes-Lemmon.  Another junior, Mark Bloomfield, stepped in as the team’s all-important fifth runner. The effort added up to a fourth place finish for the team, bolstering the Cougars’ hopes to break their two year drought of qualifying for state.

Coronado’s women earned ninth place in a tight team competition. The team will look to close the gaps between runners in the coming weeks to cut down on points and enhance their own state bid.

Varsity cross country will be back in action September 15 at the Air Academy Kadet Invitational.